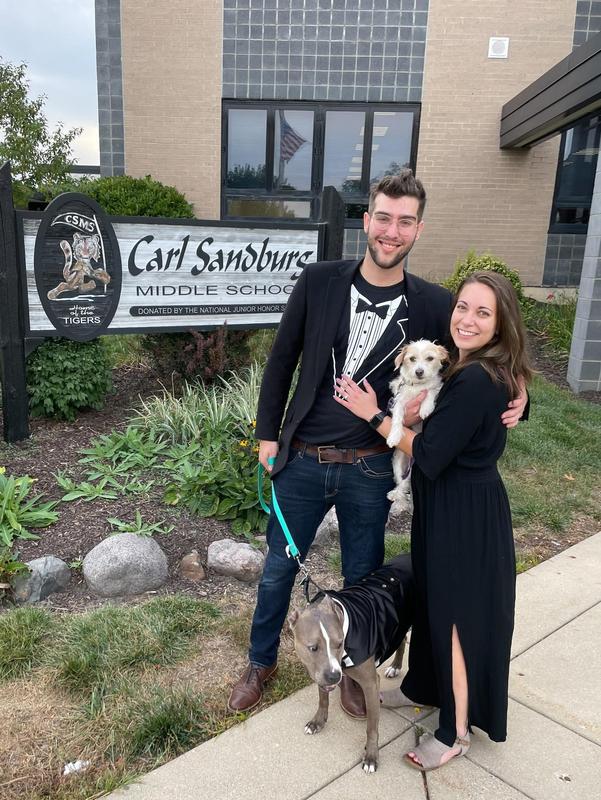 It had been a long time since Ellen Sagendorph was inside Carl Sandburg Middle School. But on Thursday night, more than 15 years after finishing eighth grade, she was returning as an alumni volunteer for the Girls on the Run kickoff meeting. Or so she thought.

Just after 6 p.m. she was greeted by Principal Mark Pilut and ushered down the hallway. But as Ellen turned to her right, she stopped in her tracks. In front of her, rose petals lined the floor, and a series of poster-sized photos of her with her boyfriend, Cameron Fleming, adorned her path. On the other end of those pictures stood Cameron (and their two dogs) -  and he was holding an engagement ring. He hugged her, dropped to one knee, and proposed.

The surprise proposal came three years after the couple’s first date. It was the same amount of time they spent together in middle school.

Their connection actually began in kindergarten when Cameron took a speech class from Ellen’s mom. But Ellen hadn’t entered the picture yet. It wasn’t until sixth grade when his family moved and he transferred from West Oak School in Diamond Lake School District 76. On his first day of sixth grade at Carl Sandburg School, he didn’t know anyone until Ellen turned in her chair and said to Cameron, “I’m Ellen. I think you know my mom.”

The pair were fast friends throughout middle school. At the end-of-the-year event in 8th grade, Ellen found out that Cameron would be attending Carmel Catholic High School. She would be attending Mundelein High. She was disappointed, but he gave her a big hug, spun her around, and they parted ways.

Their paths wouldn’t cross again until October of 2018 when they met on the dating app Hinge. Because the site showed first names only, Cameron didn’t figure out immediately that his date was his old friend from middle school. That made their first date even more special.

By the way, she said yes.